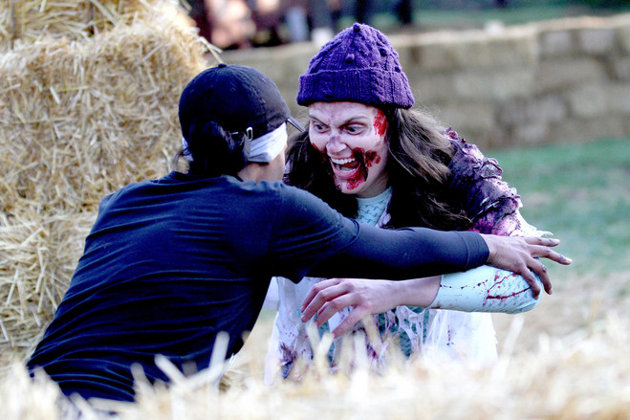 Once upon a time, I thought about running a marathon. Then I realized, I don't even run one mile without stopping, so who's kidding who?
Well, now I have my cause!

Obstacle-course races and zombie-themed events—from proms to marches to film festivals—have been spreading across the country like a flesh-eating bacteria. Now, a series of races called "Run For Your Lives" are bringing the two together. 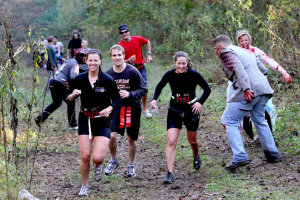 (Source: Run For Your Lives)Runners wade through pools of fake blood, duck under electrified wires and try to avoid letting zombies steal their "health flags" worn on a belt around the waist. A runner with no flags left is ruled dead—or is it undead?—and isn't eligible for awards at the end of the five-kilometer race. Crossing the finish line alive is no small feat: Only about 20% of racers make it with at least one of their three flags left.

The most amazing part of the story, is that the zombie race organizing company, is flat out RAKING IT IN! Somehow, they get the runners to pay $87 each, and the zombies to pay $25 each, just to be a part of it.

And other than some fake blood, flag football belts, a rented 70 acre plot and some cheap prizes, their costs have to be almost zilch.

Because it's all fun and games, until a guy playing a zombie, chases some 24 year old receptionist into a vertebrae snapping tree limb.
Posted by Czabe at 10:42 PM