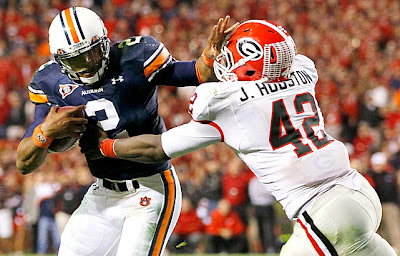 On Friday, I made the point on my radio show that the notion college football has the "greatest regular season" of any sport - by virtue of its high-wire, one-loss-and-your-dead nature - is totally absurd.

I used the just completed tepid slate of games to prove my point. Since we're down to a four-teams-for-two-spots race now, a whole wide swath of teams are totally off the championship radar because they were stupid enough to - gasp! - lose one game.

Of course, this point gets totally missed by guys like listener John (see his email below) who would rather get into DNA testing to see if I love college football sufficiently to be considered "pure."

Well, thankfully, I was able to pen a prompt reply to his screed. Isn't email wonderful!


From: John A. Witzke
Yep, another boring Saturday.

Nothing to see here.

Just admit that you don't truly have the CFB gene...you enjoy it, but much like, oh, 99.999% of sports fans who grew up in major east coast major markets, you're simply WAYWAYWAYWAYWAY more partial to the pro game...there's nothing wrong with that, and I honestly don't hold it against you.

The first time starters are ever sat out of Auburn/Alabama, UM/tOSU, etc; because each team already has clinched a spot in some stupid unnecessary media-concocted playoff, I'm moving to Asia... nothing could be more un-American!

Only a few more precious weeks left in The Greatest Regular Season in All of Sports... savor it!! -John


TO: John Witzke
FROM: Czabe
RE: College Football

I am in favor of a plus one. It would make college football, already awesome, even more so. The BCS is a tool, and a not very good one at that. But you need some kind of tool to set up a "virtual" championship game without benefit of a tournament, and a selection committee, as there is in CBB. Under my "plus 1" I would keep the BCS architecture intact, with the only tweak being a re-insertion of margin of victory, which I think is very important. Of course, I would put a "limiter" on that numerical input, to keep games like Wisconsin's 83 point outburst from being over-valued.

Under my scenario, about 12 games Saturday would have had huge implications. Instead, there were only 3. Auburn, Oregon, and (surprise) TCU. The fact that there were many other "entertaining" games only means that they are entertaining, not significant. I like watching CFB games such as Florida v. South Carolina for the pageantry, competition, tradition, and spectacle. That will never change.

But dicks like you, who for reasons completely unknown, RESIST like a child going to the dentist, the attempt to create even a modest playoff, are the most pompous and tiring assholes to debate. Sorry my CFB "DNA" doesn't match yours.

The CFB regular season is flawed, capricious, and utterly illogical. Much like a woman. And yet, like a woman, I still love it. But in the same way, only idiots wouldn't want a woman who could find a way to suppress some of her maddening "womanlike tendencies" with a little tweaking.