Congrats to Paul Gawronski! Champion of the Cover5 College League! 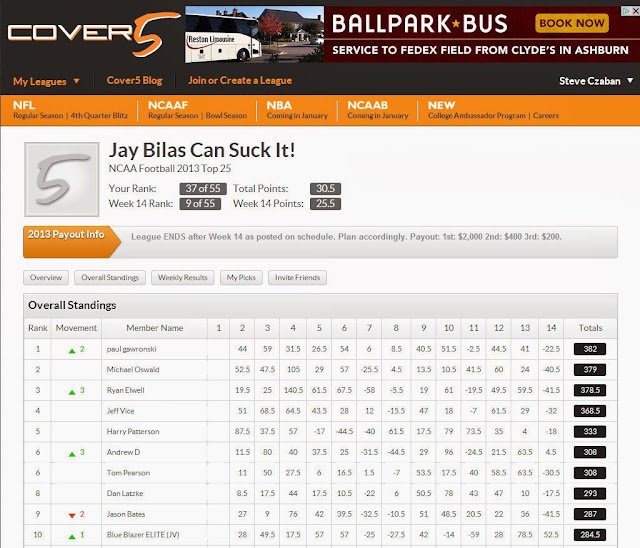 For the first year, we organized a college Top-25 league for the addictively awesome Cover5 game.

It was a lot of fun.

And, I sucked at it.

My initial boffo 80 point week, led me to believe I was going to be a CONTENDAH all the way to the end.

However, I quickly found out that I had no good feel for when it actually made SENSE to lay a whopping 34.5 points with a college team that is about to win 76-3, or not.

My season started to get wobbly and then unravelled completely in a disastrous -60 point Week 10. Such high hopes early, only to be dashed with the cold water of reality, that I was simply NOT.THAT.GOOD., not unlike a typical Clemson Tiger campaign.

I shall remain undaunted, though, and look forward to next year.

In the meantime, all hail Paul Gawronski, who survived a -22.5 point closing week to squeek out a 3 point victory in the end. That's Cover5 for ya, kids! Every game, every point matters, RIGHT TO THE END!

And for the "place" and "show" ponies Michael Oswald and Ryan Elwell, they will no doubt be thankful for their nominal prize payouts compared to the big one, they will certainly agonize for some good long time about double-disasters of -40.5 and -41.5 in the final week of play.

For Mr. Gawronski, it's gonna be a ho-ho-ho-MERRY CHRISTMAS!