"The Kennedy's of the Bayou" 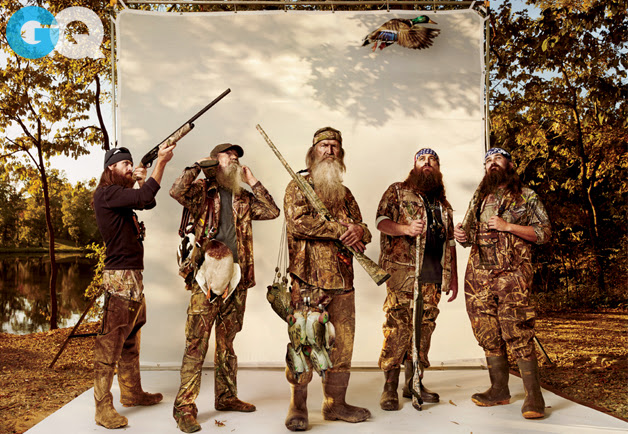 The Duck Dynasty origin story is the mighty river from which all other Robertson-family stories flow. And it is an awesome story, one that improves the more it is told, so here is my stab at it: Phil Robertson grew up bone poor in the northwest corner of this state—a place where Cajun redneck culture and Ozark redneck culture intersect—to a manic-depressive mother and a roughneck father. He was a star quarterback in high school and earned a scholarship to play at Louisiana Tech, but quit after one season because football interfered with -duck-hunting season. The guy who took his roster spot at Tech was Terry Bradshaw, because that’s how these kinds of stories go.

According to Phil’s autobiography—a ghostwritten book he says he has never read—he spent his days after Tech doing odd jobs and his evenings getting drunk, chasing tail, and swallowing diet pills and black mollies, a form of medicinal speed. In his midtwenties, already married with three sons, a piss-drunk Robertson kicked his family out of the house. “I’m sick of you,” he told his wife, Kay. But Robertson soon realized the error of his ways, begged Kay to come back, and turned over his life to Jesus Christ.

GQ - Entertainment - "What the Duck?" - By Drew Magary

This piece of writing is especially juicy for me, because I happen to know the author, Drew Magary fairly well. He's a Washington D.C. based guy, who appeared as the "3rd guest" chair on The Sports Reporters with me and Andy Pollin for several years.

He rose to prominence as a writer through Deadspin, and now does great stuff for GQ. If you read this piece as your first ever "piece of Drew", you'll know why he gets tabbed for jobs like this.

He can write like Nolan Ryan could throw a baseball.

Or, in this case, he can write like Phil Robertson can take a duck out of the air.

Drew did a great job with this. Simply great. He's a self-admitted WASP-y Northeast liberal, by way of Minnesota. He's not an "in your face" liberal, but more of an a-political liberal, who I always said could be swayed into being a pretty solid LIBERTARIAN if he just went to a few meetings.

So he could have done a hatchet piece on the Bible-thumpin' Duck Dynasty clan fairly easily, but didn't.

The comments that have landed papa Phil in the no-so-happy-happy-happy place of being on "indefinite leave" from filming, are in my mind and many others, no big fucking deal.

They are not only what he believes, but they are actually enumerated in the Bible. Not just that, but they are basically no different from what the Pope believes - AND HE WAS JUST NAMED TIME MAGAZINE'S MAN OF THE YEAR!

But pop culture in America being what it is - and they are swimming in some of the deepest waters of that pop culture now - and with the fanatic leftist stronghold of the entrainment industry wielding absurd power, a showdown like this was bound to happen. I know first hand how much the LGBT crowd loves to shake down companies and media outlets whenever they see low-hanging fruit.

And while I don't think the "B" in LGBT stands for "bestiality" I am pretty sure it was that reference which sent them into crazy mode. You can argue whether including sex with animals in the same sentence with plain homosexuality was wrong or outrageous, but I would surely hope the LGBT crowd doesn't actually defend getting frisky with a horse, a dog, or a woodland critter as generally "okay."

But maybe they do. Somebody should ask them.

I think the endgame of this will go as follows: A&E knows they can't cut Phil from the show, or the ratings would collapse, killing the cash cow. They'll say they talked with Phil about being careful with his personal beliefs, and quietly the show goes on for Season 5 as planned. Only even bigger now, since this is getting such widespread cross-over "pop" in the news.

Hell, Dog the Bounty Hunter is back on the air, in case you didn't know!

Personally, I am not a Biblical man like my wife and her side of the family, but I do happily attend church with her when possible and try to live a clean life. I certainly don't judge the strictly religious because - as they say - "I know their type" and they are usually some of the finest, most generous and caring people you'll ever meet.

I feel the same way with the Robertson's - America's First Redneck Family, or "The Kennedy's of the Bayou" as I call them - that they are inherently good people, who are going to manage to live in the burning glare of the pop culture spotlight and not let it tear the family to shreds.

The show is hokie and contrived, but so what? I feel like the boys are indeed MY long lost redneck brothers, and that Uncle Si and Phil would be two guy's I'd give up a pretty good chunk of cash to sit in a Duck blind all day with.

Still, I am jealous as hell that Drew got to sit in the very den of Redneck Mecca - Phil's cramped living room, down on the 20,000 acre Robertson duck nirvana - and hang out with the clan. I can't wait to pepper him with fanboy questions the next time I see him.

In the meantime, enjoy the entire article by Drew, courtesy of the free inter-webs so you don't even have to purchase a thick printed version of Gentleman's Quarterly with a billion ads for expensive suits and models with 31 inch waists.