The Numbers Sometimes Lie, But You Still Have To Listen 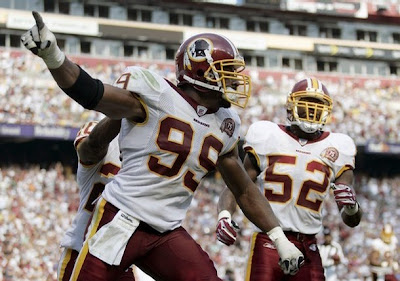 Athletes will sometimes scold the fans by saying "It's not all about the numbers."

That usually lasts right up until same athlete produces numbers that he and his agent now claim are the keys to Fort Knox.

Consider the case of Redskins free agent defensive end Andre Carter. David Elfin of the Washington Times has an interesting take on this Dan Snyder purchase that is neither boom nor bust.

On the one hand, he's a noticeable liability against the run. He has produced double-digit sacks just once since arriving, and there have been few games where any Redskin fan has raved "Man, Carter is just dominating this game!"

On the other hand, he hasn't missed a game since arriving here, and has been no worse than tied for the team lead in sacks at the end of each year, and the 8th best run defense couldn't have sucked that much with him starting every game last year at defensive end.

Personally, I like Carter. I like his attitude, he sense of responsibility, the fact he won't duck the media, and is cut like a Roman football god. And as far as Danny/Vinny free agent purchases go, he's not even close to being in the Bottom 10.

That being said, I must take exception to this quote from defensive coordinator Greg Blache: "People base success on sacks alone, and that's not what it's about," said Blache, who added that Carter led the team with 16 hurries and was often just a half-step late. "We're trying to make something that's mostly an art into a science. Putting numbers to it just doesn't work. They didn't paint the Mona Lisa by numbers. They didn't paint the Sistine Chapel by numbers. Numbers are for the idiots that can't paint."

In the case of defensive ends in the NFL, I actually DO think it's pretty much all about your ability to get to the quarterback and take him down. Period. Just like a wide receiver's job is to catch the ball and get into the end zone. Period.

Some positions are more nuanced in the NFL, but not defensive end. Get to the damn QB and cause havoc.

Sure, you can't be just a coin-seeking stat whore like Bruce Smith was in his dying days. You have to be CREDIBLE against the run. But few defensive ends in this league brag about themselves as being all about stopping the run. Those guys are called "back ups."

I also realize how freaking hard it is to actually register a sack. With all the pass-ditching-friendly rules in place now, the absurd narrowing of the QB's "strike zone", and advent of shot-gun based West Coast offenses with snap releases, I'm amazed anybody can record 10+ sacks in a year.

But it does happen, and guys that can do it (Jared Allen, Jevon Kearse, et. al.) can pretty much mint their own gold coins.

We shall see what kind of year Carter has this season. Can he go another 16-for-16? Will newcomer Brian Orakpo steal sacks from him, or generate more chances by blitzing from the LB position?

Will Haynesworth's numbers be modest, while Carter's explodes?

In all, a good read, and worthy football "food for thought."
Posted by Czabe at 9:23 AM