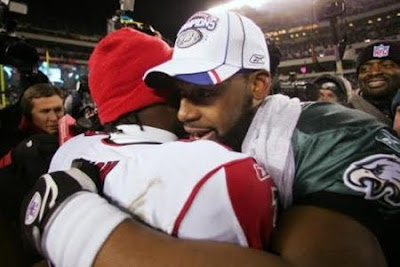 I used to respect Donovan McNabb. A lot.

The more I heard him talk about his role in bringing Vick to the Eagles, the more disgusted I got. And it has nothing – nothing – to do with Vick and his dogfighting.

On that front, the guy has paid a huge price, and one he deserved to pay because of his own arrogance. So I reject Commissar Goodell's micromanaging the return by saying he'll “review” the case at some point about 6 weeks into the season to give him full clearance.

Vick should be cleared to play now. Period.

But he should be brought in to a team for purely football reasons only. Not the mushy rehabilitation theme that McNabb has struck up for a fellow, former Pro-Bowl, black quarterback.

Oh. Whoops. Was that the race card? Sorry. Slipped out.

But since it's on the felt table, let's just play the hand, shall we?

Does anybody really think McNabb would go out of his way to lobby for a competitor to his job if it was … oh.... say.... Jake Delhomme, the disgraced former Super Bowl QB who grew up with dogfighting on the bayou but is now really, really, really sorry?

I didn't think so.

So that's fine, McNabb is on a “help-a-brotha-out” tour here, and that's his own risky game to play. It might work out. Or not.

I see one of the following things happening.

Now from a football standpoint, I just don't see much upside in any of these scenarios. And my gut says that #'s 1&2 are more likely than 4&5 but we'll see.

There is a longshot scenario, one Eagle fan posed to me... It goes something like this: Eagles shine up the rusty quarter, and trade him next year as a good citizen and QB ready to start for a 2nd or 3rd round pick. I doubt this entirely, because of how lukewarm the compensation was for a guy like Matt Cassell without all the baggage.

The bigger picture is this: McNabb has been one of the most prickly, sissy-ish, starting QB's when it comes to looking over his shoulder. A guy who clearly chafed at the Eagles using a #2 on Kevin Kolb, suddenly now is lobbying to bring in Vick?

McNabb's reasons are almost purely personal and social. The whole “he's paid his debt” and I have a “personal relationship” with him things.

From a pure football standpoint, I think the reasons are very fishy, at best.

Amazing too, that McNabb was already nearly on the curb this past season, and for the two years before that.. To think he could actually be successful in bringing Vick in for his own reasons, is a stunner in its own right.

If you are Vick, you better thank your lucky stars that Tony Dungy and Donovan McNabb put so much personal capital into your comeback.

If you are an Eagle fan, however, it's hard to respect McNabb for this move. If the socially minded QB had just been able to hit wide open receivers on crossing patterns last January in Arizona, they might have been in the Super Bowl.

Oh well. Vick's rehabilitation is very important to McNabb, so the fans are just going to have to sit down in back and shut the hell up.
Posted by Czabe at 2:17 PM