Throw The Replay Machines Away 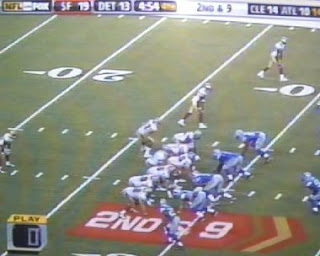 Ohhhhkayyyy…. then.
My picks sure sucked. Errrr… “Jimmy’s” picks, that is.
Ahem.
But here’s the thing: even though we went 1-3, if we just bet four-times what we normally can “afford” and we go 2-0, then we’ll be up double plus a little extra!
That’s why there’s always more games! Wheeeeeee!!! Gambling!
>>>>>>>>>>>>
Now, to the main point of today’s posting. Instant replay. All of the King’s VCR’s and all of the King’s striped men, have let us down, again.
Oh, what’s that? I can’t hear you.
Oh, you say that the horribly botched playclock NON-call on Baltimore on a crucial 3rd and 2 late against the Titans can’t be blamed on replay, because the play is not reviewable, and that’s not replay’s fault?
Fine. Say that all day. One more time, here’s my point.
Why have replay, if you can’t review everything? Don’t say that “because it would make games 5 hours long.” Because I’m not saying you increase challenge allowances. No, you get two. Good luck. Be judicious.
But there’s no earthly reason why a simple thing like playclock can’t be reviewable. No reason. None. Yet, somehow, it’s not.
And I don’t feel that sorry for Jeff Fisher, since he’s always touted as being on the “Competition Committee” that decides all these arcane, and often stupid rules.
Here’s the analogy. A restaurant is very concerned about it’s food being as PURE and clean as possible. Thus, it installs an EXPENSIVE ultra-violet light system that washes all utensils and eliminates germs.
Great.
But the restaurant says they can’t do EVERYTHING to make sure the food is pure, so they do allow the cooks to smoke. While cooking.
And every now and then a big fat ash falls in the soup (like a play clock play that even Stevie Wonder would have flagged) and there’s nothing they can do about it. Heck, you can’t even taste that cigarette ash in there. Stop being such a baby!
It’s hilarious – yet stupid – how ticky tack so many red flag challenges are these days. Coaches like Tom Coughlin, practically BEGGING for another 6 inches via videotape. And everybody wants the NFL to be so precise about stuff.
But then, on the playclock, I’ve been hearing announcers excuse violations by saying the referee has to “look up and notice” the clock is at zero, so it gives offenses an extra second or so.
Or, in Baltimore’s case, the game. Maybe. Or maybe not.
But are we going to have a rule, with a clock, or are we not? That’s all I’m asking.
Funny too, because the NBA has a shot clock, far less important than the NFL, since you get about a billion possessions in an NBA game, versus maybe 12 in a NFL game.
Yet the NBA, thought it’s shot clock was important enough to start mounting it right above the backboard, so it would be easy to see. They even have a buzzer that goes off when it hits zero.
I realize that the NFL wouldn’t want a buzzer for a zero play clock violation, since it would sometimes tangle up plays that actually beat the buzzer by a beat.
But how about a big fat, red light right on the goal-post? Can’t miss that, can ya! Hell, put the play clock ON the crossbar itself, and have it swivel DOWN when you are kicking a FG.
Okay, you get my point. I have about a dozen easily workable fixes for this fiasco, and I’ve only given it a weekend of thought. Yet will the NFL act on it?
I’m guessing no. But hey, we’ve GOT TO HAVE replay, because – gasp! – what if an NFL playoff game is decided on a BAD CALL!
Right.
Push the damn video machines into the river, and let’s just play the damn game.
Posted by Czabe at 3:52 PM No comments: