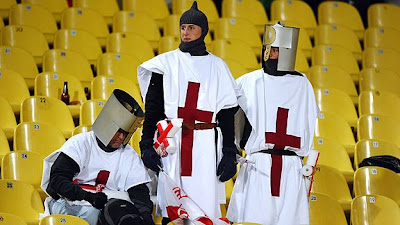 It didn't take long to remind us ignorant soccer haters what it is about the game we so loathe.

The US and England was hyped to the moon and I fell for it. Even cutting short yardwork to make sure I was inside at the specifically mentioned “1:30” game time I had been hearing all week.

Of course, game time was really 2:30, so I swallowed good chunks of Mike Tirico and some other dude I've never seen doing pre-game.

Some ninety odd minutes and orange slices later, we had an entirely un-satisfactory 1-1 tie for all of that hype and build-up.

The British side was pissed. The Yanks were sheepishly happy. And I had dozed off to the drone of the vuvuzelas.

Soccer is just as bad to watch as it was when I left it, which was four years ago at the last World Cup. You know, the one where the idiotic Frenchman headbutted an opponent costing his nation the Cup. Don't ask me about the rest of that year's tournament. That's all I remember.

Ah yes, but I know. If I only had the requisite soccer knowledge and global sporting intellect, those 2 goals would have been the crown jewels on a subtle and complex tapestry woven by the 22 players on the pitch.

But I don't. I'm American, and I prefer my sports to be interesting.

The reasons why soccer hasn't “caught on” here as a spectator sport are obvious. And the rest of the world isn't changing it for our sake. A decision with which I concur. You'll never convert us anyway, so why mess with a winning product everywhere else?

There are many stupid things about soccer, but the lack of scoring remains the stupidest.

A 1-0 deficit, and your side is playing with the burden of 11 elephants on their backs.
A 2-0 deficit and you are now just out there getting some exercise.
A 3-0 defeat and the newspapers back home will call you an “embarassment.”

It is so hard to score in soccer, it would be like basketball played on 30 foot rims.

Soccer eliminates the most fundamentally exciting thing about sports: the comeback.

There are no comebacks in soccer. If a team comes back to win a game after going down 3-0, it'll become local lore on par with a Loch Ness Monster sighting.

My humble suggestion for soccer would be to do away entirely with “off-sides.” I mean, how bad would the game look in comparison to now? You have 11 guys, so do we. If a guy is cherry picking, you might want to mark him. Spread out the players, open some lanes, allow for some over-the-top passing.

And for god sakes, get the goal count comfortably into the 5 to 4 range per game.

A quality effort for a soccer team usually produces perhaps 10-12 goal scoring “chances.” Not necessarily shots, or even shots-on-frame, but just a dozen moments where you actually say: “Hey, in theory, this team might score here.”

Assuming 20 quality chances per game total, over 90 plus minutes, that's barely one every five minutes.

And soccer fanatics like to rip the NFL for all of the “breaks in the action.” Child, please.

Hey, huddles in football don't last 4 minutes. And you can score from anywhere on the field.

What a shock soccer has never caught our fancy in America.
Posted by Czabe at 7:34 PM