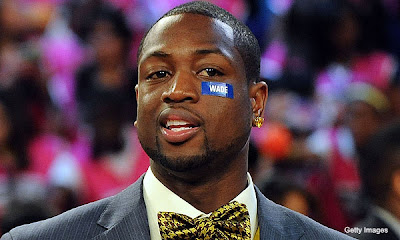 But thank god the NBA has at least some minimum standards for the appearance of its players. That's why they shut down Wade's growing collection of designer Band Aid's he started wearing under his left eye.

This is not dress up time. It's a professional basketball league. Do you think Dr. J. would have every put something like this on him when he played?

(Agreed: The Doctor's pimp-tacular outfits came off the court, where he was like Kramer wearing the technicolor dreamcoat and sporting a cane.)

On first blush, it seems harmless. After all, Wade is one of the few totally tattoo-less NBA players these days. Why not let him accessorize a little?

Well, because you know it will get out of hand in a hurry. Nothing like an NBA player who finds out he can add some "aftermarket" items to his on-court "look."

What begins as a mere bandaid for one guy, becomes a dozen or more others adding rhinestone elbow pads, Italian designer thread wristbands, and little beanie-hats with propellers that shoot lazer logos of their name on the ceiling.

Go watch an episode of MTV Cribs and get back to me.

As for Wade, dude, you are a badass. You don't need this kind of gimmick. Let your thermo-nuclear explosions like the 24 in the 4th quarter against the Knicks do all the talking for you.

Besides, I believe a guy named Derrick Chievious of Missouri once used a band-aid as his "signature" accessory.