I Actually Miss The Ol' Grump 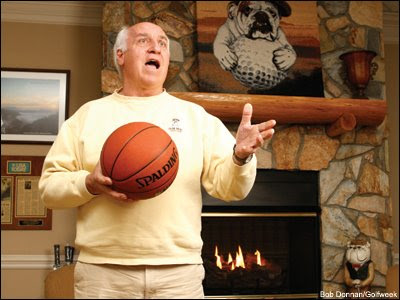 Today is the day, where you can feel a calm before the storm.

Tomorrow, it’s on. Buzzer beaters. Brackets getting folded up and put in your back pocket, unfolded and cursed at. Lying to your boss and wife about where you are, and what you are doing.

Sadly, I miss Billy Packer. And I thought I would utter the phrase: “I miss rampant syphilis” more than that phrase. But there it is. As loud, antagonistic, and so often flat out wrong he was, Packer was instrumental to the vibe of this week.

My “official” bracket will be posted by COB on Wednesday night. So sit tight. You want my BEST effort, yes? Not just a “slap-chop” effort.

Did you see Phil Nippleson hit a ball RIGHTY with his club turned upside down from underneath a palm bush en route to winning at Doral?

I tried to YouTube it. No luck. But if you saw it, it was amazing. The guy may be a world class tool, but he can do things with a golf club that are simply sick.

His caddy Bones, was going through their options, and the parabolic mic picked everything up clear as day.

Bones: “I like taking a drop back here, and trying to make 5 the hard way.”
Mickelson: (pained annoyance) “Ohhhhh…. Come on….”

Mickelson caught a TON of ball, his right handed form looked perfect, and if not for a tree which caught his ball, would have been perfectly down the fairway some 150 yards.

It reminded me of his unbelievable “backward flop shot” I saw on Inside the PGA Tour years ago. THAT puppy I did find on YouTube.

NOTE: Lotta big steak dinners for Phil since then, but who am I to talk?

CHUTZPA AWARD: How about CBS and Greg Gumble calling the advertisers on the Selection Show “our corporate champions.” Champions? Did I miss the Coca-Cola, McDonalds, Sprint Mobile bracket.

When UNLV ripped through their weak-sister conference, the Big West, back in the 1990’s, why didn’t as many people THEN dismiss their chances as people are today with Memphis?

I have pondered this for a while now, and I think I have the answer. It was because the Runnin’ Rebels played such an athletic, aggressive, next-GEN style of play, that everyone else in the country was almost in fear of them.

Except of course, my Gauchos, the last team to beat the Rebels before Duke stunned them in the Final Four rematch a year after getting humiliated.

Now, every team plays athletically, and so the premium on Memphis’ style and record, is discounted. Just a theory.

The Baltimore Sun’s David Steele had a good take on the decidedly lame Michael Phelps interview with Matt Lauer.

With that, then, Phelps should know that more talking isn't helping and is brushing dangerously close to hurting. Because on NBC the Baltimore resident came off as someone with less substance than even the average twenty-something, obsessively trained, socially repressed jock who struggles to express himself even when armed with an encyclopedia of canned public-relations responses.

For Phelps, the image from the magazine covers, cereal boxes and ad campaigns are much more beneficial. Unbeatable, majestic, confident - and silent. Barring a transformative change of personality and awareness, he should not stretch beyond that.

REACT: Futhermore, Phelps let Lauer lead him down the false road of blaming people who are “out to get him” for the photo, instead of just cutting that question short by saying: “That doesn’t matter. I made the mistake. I put my face where it should never have been.”

Tim Sullivan in the SD Tribune makes a strong case for coming down hard on Florida State’s athletic department.

If you're going to throw the book at Florida State, be sure it has plenty of pictures.

Be sure that the text is targeted for maximum comprehension and minimum exertion. Stick to small words, and not too many of them. Otherwise, you're asking for trouble.

Academic fraud has run rampant in Tallahassee, so much so that 61 athletes have been implicated and 10 different university teams will lose scholarships in an NCAA cheating case of staggering scope.

Yet the most troubling aspect of the Seminoles' seventh “major” infractions case – one more and FSU matches the record shared by Arizona State and SMU – is the reluctance of university administrators to accept part of the standard punishment, the part that involves vacating victories.

Florida State's appeal may cite an Oklahoma precedent involving quarterback Rhett Bomar, one of several Sooners who were paid for work they did not perform in a summer job. Oklahoma victories that were initially “vacated” were later restored through the NCAA's appeal process.

The difference here is that academic fraud strikes at the core mission of a university and no-work jobs do not, and that a case involving 61 student-athletes and three university employees can hardly be characterized as an isolated event or an oversight.

It is an outrage. It's time to read the riot act to Florida State. That is, of course, assuming someone can read it slowly enough to be understood.

REACT: I think the real reason Florida State is digging their heels in on the wins counting, is to make sure Bobby Bowden can be gently pushed out the door to his porchside rocking chair as the all-time wins leader in D1 football. If the set him back 14, he’ll never catch JoePa, but that doesn’t mean he won’t try to hang on another 2 years and keep trying.

We have now a world in which no less a person than Toledo (Ohio) Correctional inmate Maurice Clarett, the former Ohio State football star and hero of the 2002 national championship team who is doing time for aggravated robbery and carrying a concealed weapon, can reach everyone on our planet.

All you have to do is type mauriceclarett.wordpress.com in your command line, and you can read all the wisdom the jailbird has for you.

Trust me, it's crap.

That is, unless you think entries such as, ''I have a little rule now, everything before 11:30 a.m. is Maurice Clarett time,'' is good stuff.

The best thing I saw on ESPN on Sunday’s selection show, was NOT Jay Bilas punking the bald-headed “Hall of Famer” over his St. Mary’s lovefest.

Rather, it was a blinding montage of great moments from Championship Week set to the tune of a group I had never heard of: “The Cab” with “I’ll Run”.

Watched it about 3 times IN A ROW. Freaking un-real athleticism. Wish I had a clean, no-crawl marred, hi-def version for my archives.