If Only This Crap Actually Worked... 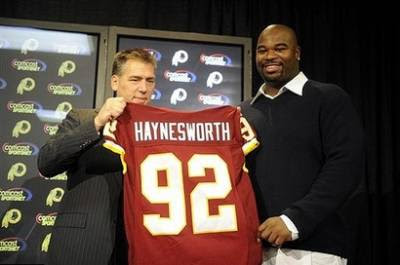 A few years ago, Joe Gibbs 2.0 told me and Andy Pollin on the Sports Reporters that the “salary cap was the most over-rated thing in sports.”

We laughed at the notion - especially in the NFL - and for years now have used that as a poster-blurb indictment of how Dan Snyder goes about acquiring talent for his football team.

But I am now shocked to think, that Joe might have been right all along.

The conventional wisdom has been, that eventually, the Skins would be faced with an insurmountable dead-cap “bill” and be forced to reckon with it by purging vast amounts of players.

We never get that bill for some reason. The accounting trick has continued to escape me.

So maybe the cap IS over-rated, and maybe I should fully embrace this coup of landing the 100-Million Man Albert Haynesworth. After all, it’s not MY money, and if other teams were just a few million dollars behind us, then what’s to complain about? He didn’t cost any draft picks in exchange, and he’s in his prime.

If only it all worked.

This stuff doesn’t work, has never worked, and will almost certainly not “work” once again. Gibbs might have been right in that a rich owner like Snyder can buy buy buy without any real cap consequence, but at the same time it will not translate into sustained winning of any sort.

It won’t work most likely, because it’s methods are so amateurish in nature. To rush out and buy a player at retail price (+10% for no better reason than ego and impulsiveness) is a failed experiment for the Snyderskins with many case studies.

If this kind of thing “worked” then football would be nothing but an arms race, with the richest clubs quickly and easily outdistancing the rest. Hell, it’s not even working that well in baseball - an uncapped league - where one individual talent can lift a team to an additional 5-10 wins on his own!

To wit, the Yankees might still finish in 3rd place in their own division!

In baseball, the numbers nerds have come up with a statistical measure that I think makes a compelling argument about the true “worth” of talent. It’s called VORP: Value Over Replacement Player.

In short, it is a statistical attempt to assess just how MUCH better is Manny Ramirez as a hitter, than another average “dude” that could fill his spot in the lineup. Some players have a VORP that justifies their premium salaries. Others, do not.

Football doesn’t have a VORP, but if it did, I don’t think there’s ANY way that Haynesworth would be worth this much money. He could have a 4-sack day and Skins could still lose if Campbell throws three picks and DeAngelo Hall muffs a punt return for a score.

Similarly, Haynesworth might be out with an injury one week, and the Skins could still win because Portis has a 200 yard day rushing against a bad team like the Rams.

A game in which the Skins are well on their way to winning without any great contribution from Haynesworth, might then feature 3 sacks and a fumble recovery in the 4th quarter of a blowout. The talk on Monday will no doubt center on what a “great acquisition” this player was!

Why? Because the team won, AND the expensive player registered statistics that make fans and sportswriters drool.

Any lack of causal effect, however, will be glossed over or ignored. Football fans can be embarrassingly dense at times, as long as they got their “W” and some blood to go with it.

But I guess if money is no object, if the cap consequences can be constantly outflanked with good accounting, if 2010 is going to be an “un-capped” year in advance of a labor showdown in 2011, then what the hell, we’ll take him.

But it’s not going to work. And I’m resigned to that.