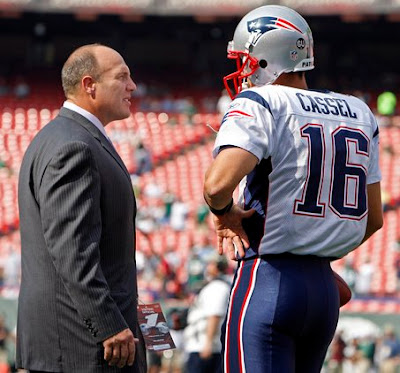 Now, for a rare moment of Peter King praise. King points out that the Patriots are so in tune with real player value, that they don't just mindlessly accumulate as many high draft picks as possible.

The accumulate a lot of relatively inexpensive high draft picks. It's partly why Belicheck didn't break the bank for Matt Cassell, taking only a high second, and not holding out for a first. Shrewd...

Back to Belichick. New England now has four picks in the first two rounds -- the 23rd, 34th, 47th and 58th. Belichick wants late ones and twos because the difference in talent between the top of the draft and pick 34 is not nearly as big as the difference in money. And the third pick in the draft this year would command a bigger contract than Tom Brady's. Thus, New England has no use for very high picks.

Let's examine the financial commitment those four picks (23, 34, 47, 58) required last year, and compare it to the top of the draft:

The eighth pick in the draft last year, defensive end Derrick Harvey, got $17.47 million guaranteed in a contract averaging $4.6 million a year. In essence, in the way the NFL pays rookies, the eighth pick's compensation is equivalent to the combined pay of the 23rd, 34th, 47th and 58th picks. Insane. Imagine if someone tells you they'd trade the eighth pick in the draft for a lower first-round pick and three second-round picks. You'd do it in a second. The Patriots will draft at least a couple of keeper players on Day 1, and they'll have the kind of salary manageability with those players that great teams with big stars have to have.

Indeed, the Patriots are like a pinball wizard, that knows not only how to play the machine, but can execute subtle little bumps to nudge the ball into JUST the right spot.

When I think of how they operate, I envision a short-bus Vinny Cerrato just mashing the flippers mindlessly on the Skins pinball machine.

Oh yeah, in a much lesser hyped move, the Skins had to release Jason Taylor yesterday after he refused to accept an off-season workout clause that would keep him in Ashburn, and not Miami.

So, if you are keeping score at home...

That 2nd and 6th could have turned into another Chris Cooley and Chris Horton. But hey, the draft is over-rated, just ask Vinny.
Posted by Czabe at 5:01 PM