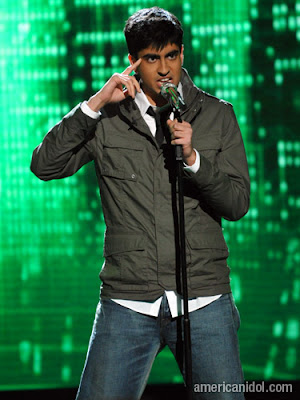 Kayne West appeared on American Idol last night, a show I had SWORE I was thoroughly done with.

(I know, it's the one show my wife and I can watch together and carve up mercilessly. She doesn't let me do the same to Housewives or Lost.)

Last I checked, Idol was primarily a SINGING competition, not a rap fest. He "sang" a song called "Heartless."

To me, it sucked. But I'm old and white, what the hell do I know?

Of course, I'm not the only one who thought the whole concept sucked worse than the Paula Abdul/Randy Jackson single "Dance Like There's No Tomorrow."

So did this Idol Blogochick.

Let's face it, Kanye may have appeared as the marquee guest on Idol this week, but if under very different circumstances he'd entered Simon Cowell's audition room as a no-name nobody and delivered this sort of vocal, the only way he would have ended up on American Idol would've been in a bad-audition blooper-reel montage.

Yeah, the whole "singing" thing was a mistake. He shoulda just picked one of his harder edged "street raps" and knocked that out. Like this one I found called "We Don't Care."

Uplifting. Wonderful. Perfect for teens and families at home.

[Verse One:]
If this is your first time hearing this
You are about to experience something cold man

We never had nothing handed took nothing for granted
Took nothing from no man, man i'm my own man

Yeah. He shoulda sung dat shit! Fer real, dawg! An' like dey shudda put da wurds up on the screen, yo! I bet Randy Jax wouldda thought it was dope!

Meanwhile, Kelly Clarkson seems to have regressed. Despite professional songwriters backing her, and years of pro experience, her rendition of her new hit song was also very shaky, at best.

Seeing as how Carrie Underwood dusts Clarkson in both looks and chops, do we really need to see her any more?

One last thing, in case anybody still cares. They've totally fucked up the batting order for the judges. Kara Dioguardi is the un-wanted (albeit snicky) 4th wheel on the tricycle, and her opinions are almost always un-necessary and un-remarkable.

And you knew what Randy and Paula were going to say (for the most part) but Simon was the wildcard in the cleanup spot.

Now, it's like Joe Torre picking the dodgers lineup out of a hat. Ridiculous.

He's a dreamboat. I bet he'll sell at least as many records as Taylor Hicks.
Posted by Czabe at 4:54 PM