Even More Fabulous Than I Had Imagined! 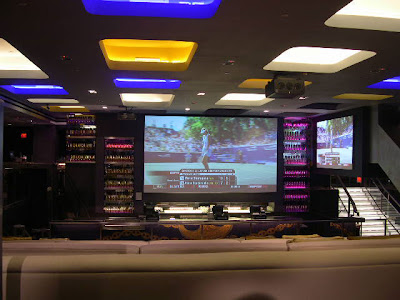 Fabulous. Did you really need to ask?

Wish you were there, but those who did jump on the Inaugural Czabe Field of 64 promotion got a real treat. A killer rate, on perhaps the swankiest digs on the strip, with a state of the art sports book, and VIP treatment with their favorite radio personality during the Sweet 16.

Thanks to Michael Larragueta of the Palazzo for making this happen. From one Gaucho to another, this was above and beyond even my expectations. I can’t wait to take it to the “next level” in 2010.

There is a Czabecast coming from the boys at SIM (and thanks again, Kirk and Jeff for coming along and doing some filming!) but let me give you some bullet points of the trip.

Believe it or not, I did not play a single hand of blackjack all weekend. Nope. Not one. And it was totally by accident. I was so busy going from the golf course, to my room for a needed 2 hour mid-afternoon nap, to the sportsbook from 4-9 p.m. and then off to various “Performing Arts Centers” or dinner at night, that I didn’t realize this “feat” until I was checking my bags at McCarron International on Saturday afternoon.

My Sweet 16 wagers sucked. I started out 2-0 and then flat out tanked, finishing 0-6 on a variety of sides, totals, and money line plays. My worst calls were the UNDER on Memphis v. Mizzou (an inexplicable 142, which seemed like a trap, so I ran toward the smell and got clobbered!) and Duke -2 vs. Villanova. Xavier money line was still a good play, it just didn’t come home (damn you Levance Fields!). So was Kansas over Michigan State, it’s just that Izzo’s boys laid some seriously suffocating defense on the Jayhawks down the stretch. I played Gonzaga as a money line play only, based purely on my heart. So much for that. Someday, I’ll learn my lesson on the ‘Zags. Carolina was great, and I quickly lost heart when it was apparent that Mark Few had decided to play so up-tempo, that the game resembled a pick-up run at the YMCA. Good night now, you won’t win that one vs. UNC’s studs.

I hesitate to say this too loud, because I want it to remain my new favorite spot, but I owe it to the good folks at the Palazzo. Their sports book is THE BEST I HAVE EVER SEEN in my 14 year history of going to Vegas for the tournament. First, thanks to Jay-Z for not paying his bills on the place and defaulting it back to the Resort. Originally, the whole place was Jay-Z's "40/40 Club" but that agreement went south in a hurry according to my source. Thankfully, he spent the money for HD everything, and it was well worth it. Secondly, they put the main theater screen in the middle of a two-level bar area, with a stadium seating set of risers right in front of it. The lounge chairs and recliners are phenomenally comfortable. Like you should be kicking it in your PAJAMAS while watching the games. Now as you might expect, during big events (football, college basketball) those seats are at a premium, and you must reserve them for a price with the casino. I have no problem with that. Still, you can easily watch the games from the catwalk railings on each side for free. Better yet, the bar/sportsbook has literally HUNDREDS of HDTV’s mounted in every nook and cranny. These are easily viewable from a bunch of seating “clusters” that accommodate your group of homies for drinks, food, and shenanigans. Outside the bar/theater area, there’s two different “windows” where you can make bets or cash tickets. The lines are very manageable, because they designed the sportsbook to be a destination for sports fans, not a big open area that gets crushed by general casino traffic. They did this thing right, in every conceivable way.

Of course, it doesn’t hurt to have connections either! Because my group was riding with The Czabe, we also had a 25 person capacity private room where we lounged in front of 3 different 60-inch plasmas running true HD and both games at once. There was a pool table, a video game machine, and hors’ d’ouvers. From 6-7 p.m. each night, my trip guests drank for free. And drink, they did!

Thanks too to “Drunk Larry” (his nickname, I swear!) from Atlanta, a devoted listener of the Steve Czaban Show on Fox who did the advance scouting on the best HD sports books over Super Bowl weekend. Larry helped hook me up with Larragueta and we just went from there. Larry, you are one serious degenerate. And I love you for it!

The Rhino. My god, the Rhino. There is simply, no place on earth like it. My recommendation is to get there at about 9 p.m. It’ll be stocked with “performers” (all 8’s, 9’s and 10+’s) yet not so crowded that you can’t find a seat. Then take 200 bucks you would have otherwise easily flushed at the craps table in about 20 minutes. Spend 5 of them 20-at-a-time “trying out” some un-restricted free agents at your table. When you find one you like, sign her to the VIP contract for $100 in the back. Repeat as needed. My god, the Rhino!

Manage your clock. I love my guy Gitter, but he was drinking so hard, so fast, and for so long, that about 9 p.m. on Friday night he went “Blackhawk Down” in the middle of dinner. He got up from his seat, claimed he would be back, and then just disappeared for the night. Booo! I know that taking naps is “gay” in Vegas, but wouldn’t you rather spend two hours in the afternoon recharging for a good hard wild night, than just hitting the wall Dale Sr. style?

Vegas has a new slogan. And you won’t believe how lame it is. “Las Vegas. America’s Affordable Meeting Destination.” Uhhhh huh. No really. Because of politicians successful demonization of Vegas junkets, the whole “What Happens In Vegas…” thing is being phased out by the tourism board. When Citibank cancelled their junket this year, the $1.5 million trip rippled through the local economy. Citi re-routed the junket to San Francisco, and had to pay a $500,000 cancellation fee to MGM Grand, but losing that trip cost many people down the food chain money. Cab drivers, maids, dealers, and the like. And like I said, Citibank still took people to San Fran on a junket. It even cost the company (and thus, taxpayers) more money due to the re-schedule. But hey, it sure did “feel” good, didn’t it, sticking it to evil Las Vegas? Right. Ridiculous.

The Perfect Storm. Vegas is currently being hit with the near perfect storm of economic headwinds. Sub-prime mortgage crisis, recessionary caution from travelers, and political grandstanding. You won’t really notice it walking around the strip, but you will notice how great the rates are, how many free “perks” are being handed out (drink tickets, free appetizer coupons), and how much easier it is to get tee-times on local golf courses. The town will survive and thrive, but it’s gotta hang tough the next 24-36 months.

Plus, they got greedy. After years and years and years of building bigger, fancier hotels. After the same years of nearly 97% occupancy at rack rates, I can understand why so many developers would double down. But guess what, the shoe just turned ice cold. Not like you and I haven’t had that feeling before at the blackjack table, right?

Maybe the worst idea somebody had, was to build on-the-strip condos. Excuse me for having to ask this question, but who the hell would want to OWN a condo on the strip? How many trips to Vegas can you take per year, without the magical feeling wearing thin? Five, six, maybe? So if you go to Vegas 6 times a year, and stayed at the Palazzo for each trip at $250 a night for 3 nights, you are only going to pay about 3 months worth of condo mortgage on a 5-star hotel experience. With no downside, no downpayment, no property taxes, and no need to make your own bed our scrub a toilet. Well, right now the massive City Center condo project is teetering on bankruptcy. MGM stroked a huge check from their own bank account to keep it alive for another few months. The whole thing is a massive eyesore in the dead middle of the strip, has been that way for OVER two years now. Furthermore, it has seriously crimped traffic flow, and the ability to walk the strip. Who knows what will happen when MGM finally runs out of cash on this, but I wish they would either push it to completion, or just demolition the whole thing and write it off.

Finally, a quick re-cap of the golf. We played The Chase at Coyote Springs on Wednesday. Awesome new layout, literally in the middle of nowhere right now. You go up 15 like you are going to Mesquite, and then take a left for like 20 minutes on a desert road. Nicklaus designed, it was in flawless condition. Highly recommend. Wolf Creek on Thursday in sustained 20 mph winds, with gusts to 40 mph. Oh, what fun. Still, a must see course if you have never been there. Awesome. First look at Bali Hai on the south end of the strip. It used to be very, very, very over-priced at about $350 a round in prime time. We got on it at 8 a.m. on Friday for $200. At that price, it’s a very nice course in excellent condition. The holes do tend to look alike, because they had to take a flat piece of desert and make something out of it, but the par-3’s are all very strong. Then on Saturday we played Royal Links, a British Open “knockoff” course about 20 minutes east of town. I was pleasantly surprised. The mounding and heather was quite well replicated. The pot bunkers were authentic and a bitch! Greens were very healthy, and in perfect condition. It didn’t hurt that the weather finally turned nice. By the 11th hole, I peeled off my long sleeve windshirt for the first time all weekend.