One More Time, With Feeling 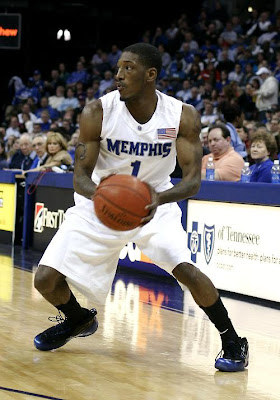 A year ago, the Memphis Tigers and John Calipari were right where they are now. Only they were a #1 seed. They had a dynamic freshman point guard, and were destroying their conference.

Names have changed, but not much else.

I'm buying in. Call me a fool. I remember last year when Coach Cal said about his team's woeful free throw shooting: "We'll make them when we need 'em."

This year, Memphis is just as athletic, nasty, and hungry. Only they shoot 70% from the charity stripe, not 61%.

You can see my bracket here at Czabe.com. Now for a few thoughts, cranked out as I walked through the top seeds one more time.

OKLAHOMA
IS ONE SUPER-STUD ENOUGH TO WIN IT ALL? SOMETIMES...
WHICH WILLIE WARREN WILL SHOW UP?
CAN THEY AVOID THE “SAVE US BLAKE” MENTALITY IN THE CLUTCH?

UCONN
CAN THABEET STAY OUT OF FOUL TROUBLE?
DO THEY HAVE DEPTH AT GUARD?
WILL CALHOUN DONATE WINNERS' CHECK TO STATE FUND?

MEMPHIS
IS THEIR LEAGUE REALLY THAT BAD? OR ARE THEY THAT GOOD?
CAN THEY REALLY HAVE BACK-TO-BACK FR. PG'S TAKE THEM TO FINAL FOUR?
NOT THE BEST THREE POINT SHOOTING TEAM, BUT THEY CAN ALWAYS TAKE MORE

PITT
4 TIMES TO THE SECOND WEEKEND IN 7 YEARS.. CAN THEY BREAK THROUGH?
SOLID ALL AROUND... ONLY GRIPE: 67% FREE THROW SHOOTING
ANY LINGERING LEVANCE FIELDS INJURY ISSUES?

LOUISVILLE
CAN RICK PITINO WIN WITH A BUCKET OF INTERCHANGEABLE 12 AND 8 FORWARDS
HOW COME THEY GOT DRILLED IN SEASON BY UCONN AND NOTRE DAME?
HAS THE WHITE “TONY MANTEGNA” SUIT BEEN DRYCLEANED AND READY?

ALL THAT SAID... LET'S THROW OUT ANYBODY IN THE TOP 8 WE DON'T THINK CAN ACTUALLY CLIMB THE “OFFICIAL LADDER OF THE NCAA” - WERNER LADDERS – AND CUT DOWN THE NETS.

I think whomever emerges from the Louisville, Memphis side of things, wins it all. I like their “side” of the bracket a little better, so even if neither one makes the Final Four, whomever beat them will have proven to be title worthy.

VCU: Eric Maynor is a pro who can be almost un-guardable.
FLORIDA STATE: Toney Douglass and company can win close games.
SYRACUSE: Hot at the right time, and they have all the needed components.
W. KENTUCKY: Beat L'Ville this year. Hello? Return many elements of last year's team.
GONZAGA: No longer just Dickau or Morrison hitting three's. Solid all around.


THE DUDS: “They are who we thought they were!”

UTAH STATE: Stew Morrill is now 1-6 in tourney play, Aggies didn't schedule anybody.
SOUTHERN CAL: Worst program ever in terms of NCAA focus. You suck, Floyd!
OHIO STATE: Siena will eat your lunch, Buckeyes, and they aren't even in the SEC!
UCLA: Their NBA defections hurt much worse than Memphis. Inconsistent and plodding.
ILLINOIS: I know it's the Big 10, but would it be too much to ask for 40 points?


TOO BAD, BECAUSE THEY ARE JUST TOO YOUNG
Wake Forest
Washington

TOO BAD, BECAUSE THEY GOT HURT AT THE WRONG PLACE
Marquette
North Carolina
U-Conn

TOO BAD, BECAUSE THEY ARE FUN TO WATCH
Oklahoma
Clemson
Kansas

TOO BAD, BECAUSE YOU GOT A HORRIBLE DRAW
Cleveland State
North Dakota State
American
Posted by Czabe at 10:15 PM