If You Ask Me, Fightin' Is Alright! 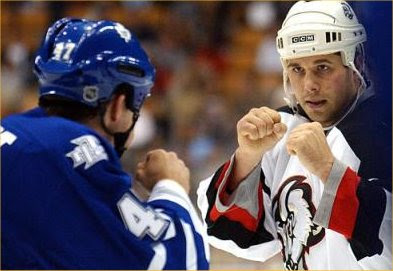 The NHL is out chasing it's own shadow again.

Apparently, somebody thinks that fighting is a "problem" in the league, and so the Board of Governors meeting this week took it upon themselves to consider a renewed crackdown on the good ol' fashion hockey tussle.

Question: what survey shows that fighting in hockey has an adverse effect on attendance, merchandise sales, television contracts, or sponsorship deals?

Forget the occasional pansy dad who says "I won't take my kids to another game until they eliminate fighting!"

For one, those guys aren't real hockey fans to begin with. They obviously can't rationally explain to their kids that a fight in hockey, is far less physically damaging than a slapshot to a padless area of your body, or a hard check into the boards. They also can't explain to their precious little kids that there still remains a code to fighting, and that it is almost always tough guy on tough guy, and usually at the appropriate moments in a game.

Once the playoffs begin, fighting evaporates like a morning fog at lunchtime.

Besides, have you ever been to a hockey game where a fight broke out and the fans booed? I haven't. Every time, even if your hometown boy is getting pummeled, there's a rousing cheer for a good honest scrap. The intensity of a shift in which you just KNOW two guys are going to "drop gloves" is electric.

I've railed before about how ruinous the safety nets in NHL arenas have been. There was ONE tragic incident in 80 years of the league, and now some of the best seats in the house (end zone, mezzanine level) are permanently marred. If you now take out fighting entirely, you should just shut down the league.

The days of entire benches clearing to go fist city are over. I'm fine with that. Even though I vividly remember the days in high school when me and my buddy Andy Janowiak (his dad had the tickets) would go to games at the Cap Centre. We were at the final pre-season game one year, and got to witness an annual ritual in the NHL back then.

Since this was the last chance for marginal minor league players to impress the organization, they would make sure to show their bosses that they could always be valuable as a third-line enforcer if needed.

These last games before the season were usually epic donnybrooks. Benchclearing melee's that involved 3 active fights at a time, with goalie-on-goalie action, and penalty minutes into the 200's.

In short, it was fucking awesome. Period.

Right now, fighting is perfect right now in hockey. It's there. It's conducted with proper honor (take off your visor, sweetie), and it doesn't take 30 minutes to clear the ice and benches of sticks and helmets.

Memo to the NHL: leave it alone.

Besides, Don Cherry is getting old, and he still needs something to live for.
Posted by Czabe at 5:14 PM