A Fair Tweak, to A Foul Rule 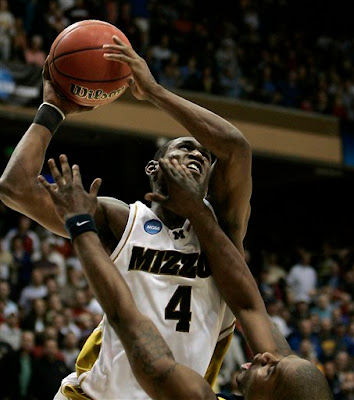 Forgive my two days off from the blog, oh dear readers. I am currently in Los Angeles, hosting my national and local shows from the Fox Sports Radio mothership in Sherman Oaks, California.

Internet has been spotty, and I have been screwing around by myself in the hotel room, if you.. ahem... know what I mean.

That said, I must give myself a hearty pat on the back. (I know, it's so rare!)

When Missouri coach Mike Anderson made the controversial move to replace star J.T. Tiller at the end of the game for his winning free throw attempts, by claiming injury I thought that on a scale of 0-Horseshit it ranked about a 7.

Not totally egregious, because Tiller was sent to the floor very hard, and also because he sent a technically inferior FT shooter (by percentage) and a freshman to boot, to the line instead, Kim English.

English nailed them both, Lazar Hayward (bless his clumsy heart) stepped over the line, and then the refs took the rest of the night off and declined to either a) call the obvious foul on Acker's attempted 3 or b) decide if the game was actually over in a timely fashion?

Anderson's move was risky. It could have blown up. But didn't. So I hesitate to crush him on it. Plus, Jim Calhoun pulled the same thing this year with noted bricklayer Hasheem Thabeet, and Creighton did the same at the end of their NIT game (or so I'm told).

My main point in arguments on both shows Monday, was the this loophole needed to be closed, because it violetes the equity spirit of sports rules, and is wide open for abuse.

Right. There IS no standard. And their couldn't be, short of X-rays or an MRI.

So, there MUST then be a strong counter-weight to shenanigans in the rulebook. In college, the rule says you can replace the shooter with anybody, including bench players, and the "injured" player can return at the next whistle without penalty.

Too lenient, I insisted.

My solution - one I swear I just thought up on the fly - would be to say in the final 2 minutes of the game, a player too "injured" to shoot, would be replaced by a player of the OTHER team's choosing, from the 4 non-injured players on the court at the time.

Well, Seth Davis of CBS Sports laughed at the suggestion.

Seth Davis is wrong. And here's why.

Little to my knowledge until a listener notified me, THIS IS ALREADY THE RULE IN THE NBA!!!!

Rule #9 Free Throws
EXCEPTIONS:
(1) If the offended player is injured or is ejected from the game and cannot attempt the awarded free throw(s), the opposing coach shall select, from his opponent's bench, the player who will replace the injured player. That player will attempt the free throw(s) and the injured player will not be permitted to re-enter the game. The substitute must remain in the game until the next dead ball.

My prediction is that this loophole will be closed in the next few years because it offers too much of an advantage to a team willing to accept a few boos in exchange for a much better chance of winning.
Posted by Czabe at 9:58 PM