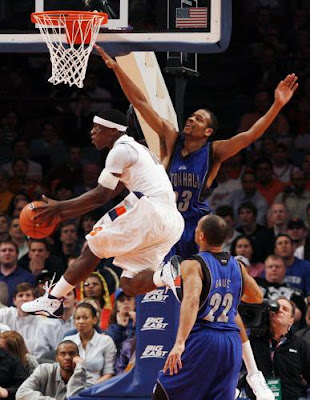 Sometime around midnight eastern, a little less than a month from now, I am going to curl up under my covers and cry.

Nobody loves this uber-cheezy David Barrett ditty more than me, so it came as quite a disappointment to hear that the CBS executive responsible for getting this awesome yearly montage on the air had passed away.

His name was Doug Towey, and the boys at AwfulAnnouncing.com do a great job with all the details.

Being a huge fan of OSM (doesn't everything need to be abbreviated today?) I have many of them saved on my video iPod. I don't have them ALL, but perhaps someday I will.

On this blog post, the boys mention the ORIGINAL OSM when Indiana stunned Syracuse on Keith Smart's jumper. It's well worth another watch, if for no other reason, than to remember when Bobby Knight was still a very relevant college hoops sideline BADASS!

But please note something else on the original OSM. How lame the highlights are.

Now maybe the editing equipment was more crude (it was), and maybe they didn't have much time to throw it together (not sure). But even factoring out those issues, please note how stiff, gawky, and straight foward the BASKETBALL was back then.

I'm not saying the modern game is "better" than before, because that's a long argument meant for many beers. But this much cannot be argued. The modern game is FAR more "electric" in it's athleticism.

It's not even close.

One play from the Syracuse v. Louisville Big East final really brought that fact home. It was when 'Cuse's "Belgian Waffle" Kristof Ongenaet went crashing to the floor on his head after a fast break dunk ahead of pursuit.

Had Ongenaet not landed so horrifically, it might be a play you don't even think twice about. But with the 1987 OSM montage still fresh in my brain, I thought of how athletic the game has become now at every level.

Johnny Flynn delivered a low-skip, 30 foot one-handed bounce pass on the DEAD RUN to a white kid from Belgium (Belgium!) who scooped it up effortlessly and finshed with authority.

Transported back to 1987, that play alone would have humiliated the tame-ass stuff on the original OSM.

Again, I make no judgment on whether the current game is "better". Certainly, early NBA defections, selfish stars, bad fundamentals, and AAU coaches have deteriorated much of what could be called "solid" team play.

But today's players just move so much more fluidly, they slip between defenders with greater audacity and stealth, and soar over guys with such regularity, that you can see how the game has evolved.

Meanwhile, I'm still working on my brackets. They will be posted here with notes tomorrow.