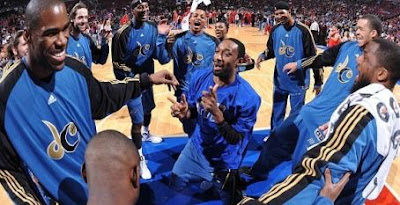 While everybody and their mother is busy killing Gilbert Arenas, allow me to focus on the real issue.

The AWOL Commissioner continues to prove (to me, at least) that he has become the do-nothing, see-nothing, useless hood ornament of a league that continues its PR death spiral.

Stern hit him with an “indefinite” suspension, that “will ultimately result in a substantial suspension, perhaps worse.”

Why did Stern suspend Arenas? Not for bringing guns into an NBA arena/lockeroom and “jokingly” urging his pissed off team-mate to “pick one” to use to shoot him.

“His ongoing conduct has led me to conclude that he is not fit to take the court in an NBA game” said the commish in a statement.

The court might be the only place he’d be “fit” to appear right now. At least you can’t hide a gun in your game shorts. (I think.)

Dan Steinberg of the DC Sports Bog, has a detailed chronology of how many times, and how many ways, Arenas seemed to be taunting the league’s inaction on this issue.

Stern tried to claim he was protecting the legal process by urging restraint on the league’s part, and the Wizards. This is idiocy. Sitting Arenas down – even as a “healthy scratch” – while still paid, and still on the roster, was the easy MINIMUM the team should have done.

Stern’s duties as commissioner are multi-fold. But certainly one of the most important, is to be the guardian of the league’s image.

If Gilbert isn’t suited up and playing, then he can’t become the new poster-boy for spoiled, idiotic, overpaid, criminal NBA athletes. That photo would have never happened.

That photo, now out there FOREVER, in the bloodstream of the world wide web and beyond, happened because David Stern was asleep at the switch.

Funny, because Getty Images which took the photo, is merely a distributor of the image. The NBA still owns the liscense. At about 3 p.m. yesterday, as ESPN.com and other outlets were picking up on it, the NBA directed Getty to remove the photo from their archives.

Somebody (probably not Stern) soon realized the league SUPPRESSION of a photo like this, would then become a major story, called Getty back and asked them to please restore access to the photo.

It was the first smart thing the NBA has done. Let’s see if it is the last.
Posted by Czabe at 9:57 AM