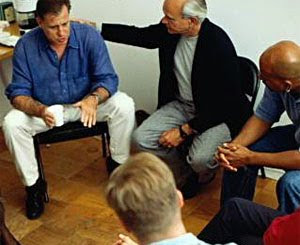 Have you ever seen how they start meetings at addiction support groups?

They don’t want to know where you work, what school you went to, how nice your car, house, wife might be. Because it doesn’t matter.

You are in that room, in that circle, because you have a problem. And the only thing that really matters, is you admitting that problem loud and clear, without any “ifs, ands, or buts.”

The Redskins need to pull up a chair in that circle and do the same.

“Hi, my name is the Washington Redskins, and I am a laughingstock.”

When the Shanahan Regime gets fully installed, there will be inevitable hope for immediate turnarounds, and another “quick fix” springtime of free agents and draft picks.

This will be fools gold, again.

The Redskins have been a mediocre franchise on their best days the last ten years under Dan Snyder, an abject joke the rest of them.

Turning things around – truly, “changing how we do business” as Bruce Allen said on Monday – will require the following three things…

Realism
This is perhaps the hardest part of the equation for both fans and Snyder. We suck. We are a joke. Look around us, who are our NFL neighbors? I’ll tell you who.

The Redskins have won 10 games or more exactly ONCE since 1991.

The Redskins have won their division, exactly ONCE since 1991.

As I say to my buddies: “Unless you win 12 games in this league, you ain’t shit.”

There’s one Pro Bowler on this current roster.

Pro Bowl caliber salaries? Sure. All over the place. And that’s most of the problem.

Until we as Redskins fans – and more importantly, ownership, coaches and players – realize how fucked up we are, we won’t have the ability to get better.

Realism: “Hi, my name is the Redskins, and I am a laughingstock.”

Control
This part is relatively simple. Who has the hammer on this team? It better be Shanahan. Because the days of going around coaches backs to the owner need to end. Now.

The days of the owner having lunch on a weekly basis with certain players? Over.

The days of the owner going to Las Vegas for a hi-roller party with the star running back? Over.

The days of injured linebackers watching the game from the owner’s box? Over.

There needs to be a clear and unbreakable chain of command, and it needs to be an Allen-Shanahan partnership. A mommy and a daddy.

I also don’t want Snyder flying around on his jet, having dinners with agents and players this off-season. Enough dinners already. Having dinner with a player doesn’t tell you shit about him. It just sets the wrong tone for the entire negotiation. We want you here as a player. We think you are worth this much. Are you interested?

The wine and dine culture, then translates into the corrosive locker-room that helped sink this season.

Focus
This is the most under-rated quality of any successful person, or company.

The ability to train your mind on a goal, and to keep relentlessly pursuing it until it is achieved. Not letting distractions, setbacks, or additional burdens slow your pursuit.

Does this new Redskins brain trust have the focus to endure what will certainly be a transitional (read: no playoff) year in 2010? Do they have the focus to then press ahead with a growing year (maybe playoffs) in 2011? If all goes well, then maybe they could have a contending year in 2012.

Can this current regime, actually go through 3 non-playoff seasons, and not make any panic moves? Can they say: “Well, we went 5-11 in year 1. But we cleared out many bad apples and started restocking our talent. We went 7-9 and showed some promise in year 2. And in year 3 we went 9-7 but could have easily won 11 games except for a few bad breaks. Let’s not make any sharp moves. We’re doing fine, and with a little bit of help on the injury front next year, we think we’re gonna have a really good football team.”

Can they actually do this? Can we as fans be patient along the way?

Remember, the “let’s win it all NEXT year!” philosophy has been the primary cause of this decade of misery. We’ve had a bad decade, on top of another bad decade before that!

These things don’t get turned around easily.

It’s simple, but difficult. Like recovery, one day at a time.
Posted by Czabe at 10:16 AM