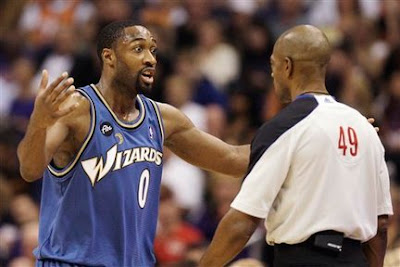 The Washington Wizards - and the NBA, by extension - face a defining moment on whether they have the right to void the remaining $80 million of Gilbert Arenas' contract.

If you can't cancel payment on this one, then what does it take?

I for one, am hoping the Wiz have the balls to take this one all the way to the ends of the legal earth.

In fact, I hope the Wizards not only cancel the contract, but they slow-pay/no-pay Arenas if he ends up winning after all the appeals.

"What? Paycheck? Um, yeahhh. We'll send that out this week, promise."

Sadly, all accounts right now, say the Wiz have virtually no chance of winning this one. In NBA history two things have never happened. Ever.

1. A player has said: "You know, I've got enough tattoos already."
2. A guaranteed contract has been successfully voided.

Once upon a time, Latrell Sprewell choked his coach in a fit of rage.

The Warriors voided his deal. An arbitrator reinstated it.

That still shouldn't dissuade the Wizards. They need to make their case, press their case, and should they fall short anyway, I want them to bellyache publicly about it.

Layout the particulars, going all the way back to his knee injury.

Talk about how Gilbert ignored team doctors and rehab specialists to do his own thing, costing him two full years on what should have been a garden variety knee injury.

Talk about his open insubordination to coach Eddie Jordan, putting himself in and out of playoff games like there was a doggie door attached to the bench in front of his seat.

Talk about the juvenile "pranks" he pulled on team-mates, one of which involved shitting in a teammate's shoe.

Emphasize the direct, and widespread malaise that Gilbert's actions have inflicted on the team in particular, and the franchise in general.

Make the very specific point that bringing him back to play for his absurdly bloated contract, would engender such animosity from fans, that the team would absorb season ticket defections and sponsor boycotts.

Put it as plainly as possible, that this clown has wrecked the franchise. Not just wrecked it now, but wrecked it for the last two years, and most likely for several years to come.

His gun stunt cost the team 50 games worth of services, in a truly make or break season. One where the now deceased owner ponied up 79 million dollars worth of payroll to see if the roster that has been waiting for the $111 million prankster could finally be the missing piece.

His contract may not state specifically the implied leadership responsibilities of that much money, but it shouldn't have to.

Make him "Contract Zero." Fight it to the bitter end. And make no apologies for it.
Posted by Czabe at 4:13 PM