Playing for the T-Shirt 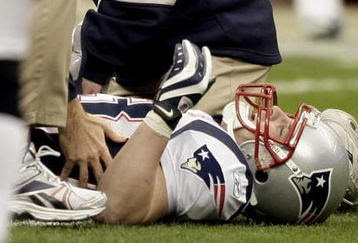 Well, that Wes Welker injury ought to shut everyone up about Jim Caldwell and the Colts not going for the win last week against the Jets.

If not that, how about the absurd snowstorm the Colts would have been obliged to chase history through?

Are we done yet?

The banter from NFL talking heads on this issue was nothing short of comical. It was like Caldwell had robbed a bank. The consensus seemed to be that you simply HAD to go for “history” by trying to win even meaningless late season games. Even though Bill Polian correctly pointed out that going 16-0 was not historic. (See Patriots, 2008.) Nor was it ever one of their goals.

Polian, correctly saw the regular season and winning the Super Bowl as two separate things. The pundits wanted him to see it as one great tapestry upon which Peyton Manning could have painted a masterpiece.

The fans, well, they seemed to be rooting for the t-shirt.

Except that would be highly debatable. Perfect is not greatest.

The Colts had many games this year in which they were dead to rights. Greatest escape artist team ever, perhaps.

The Dolphins out-time-of-possessioned them 45-15 in minutes, and they still needed a 48 yard Pierre Garcon catch and run in the final minute. Joe Addai throws a gadget pass for a TD to escape the Niners 18-14. Kris Brown chokes on a 44 yarder at the gun. A two point squeaker against the Ravens.

These Colts are mighty good. A juggernaut, no.

Yet former players who now get paid to talk on TV, almost never pass up a chance to sound tough, get outraged, or second guess a coach. You’ll never hear one say: “Eh, big deal. It’s the smart thing to do.”

Now, Roger Goodell, one of the dimmest bulbs to ever land on top of a major sporting league, has said the league is going to investigate ways to give teams an incentive to play all their starters to the bitter end of a season.

Yeah. Sure. Good luck with that.

Compensatory draft picks? Get real. How many 3rd rounders would it take for the Colts to risk Peyton Manning getting creamed in the snow? Would the Saints have played Drew Brees for a half, and then walked over to the commissioner on the sideline and ask for their draft pick coupon?

And please don’t start with the “fans are getting ripped off” angle. Fans get ripped off all the time. They are very much aware of the rip offs out there (parking, $8 beers). When you arrive at Week 17 and you have tickets to see Peyton play your Bills, and he sits, that’s bad luck. Not a ripoff.

Besides, fans would be elated if the Bills were playing for their own playoff spot.
There is no way for things to be perfectly equitable for every team as the season unravels in the final weekend. It is a sloppy buffet of the-bus-is-running-outside-already (Giants), skeleton rosters (Redskins), and no-thank-you portions of playing time (Chargers).

And you guys on TV, find something more interesting to talk about.

There might be a Super Bowl parade in Indy this year, but you can cancel the t-shirt.
Posted by Czabe at 8:40 AM