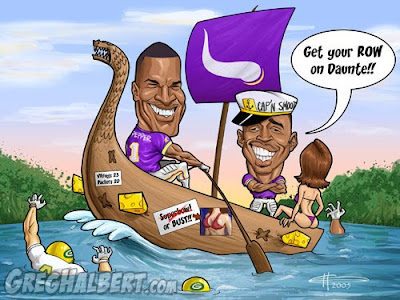 If you thought that the humiliation of all things Vikings and Favre was going to be a one-day affair here at Czabe.com, then you are wrong, sir!

When the Football Gods deliver a meal of schadenfreude so juicy and fresh, it is at your own karmic peril that you dare push away from the table.

For starters, here's this from reader Eddie Malek...

FAVRE’S TOP 10 TO DO LIST AFTER THIS GAME
10. Blame Jet’s medical staff for loss.
9. Wonder why Childress has not picked him up yet for ride to airport.
8. Pick up “Most Interceptions in Career” award.
7. Release statement that Deanna is actually his sister.
6. Take his brother for a car ride.
5. Tell the “Bi-Queens” he will give them an answer sometime in September.
4. Serve Cocktails on the Madden Bus wearing just a banana hammock.
3. Plan a hot tub party with Chmura.
2. Call Thompson & McCarthy @ 3:00 in the morning drunk to apologize.
1. Doing new TV ads for Vicodin.

And then there's photo-shop jobs making the rounds like this one... 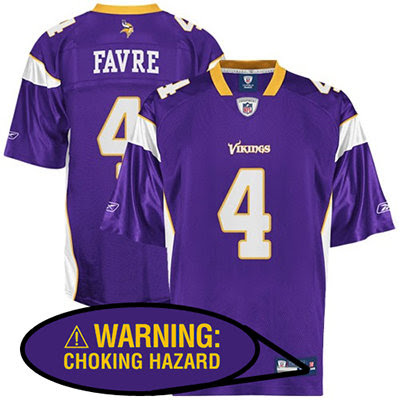 From Wade Wundrock in Milwaukee.....

Interesting tidbit from local sportscast after the NFC Championship game;

If Favre retires, his last pass for Atlanta, Green Bay, NY Jets and Minnesota will all have been an interception.
I thought that was rather ironic.

And finally, as promised, the bullet pointed version of all things Minnesota Viking Misery...

and I'm sure I've forgotten some.

Now you can throw this loss on the burning trash heap of sports misery. Enjoy, Viking fans! Ragnor will now let you cry on his shoulder!
Posted by Czabe at 12:01 AM