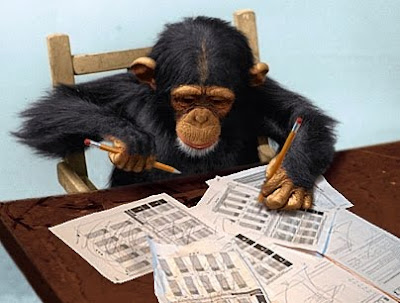 Somebody once asked me: "What do you have against Peter King, anyway, Czabe?"

He's never wronged me personally, and as such, I have no personal animus against him. In fact, he's supposedly one of the nicest sports media "stars" in the business.

Yet my professional animus for King seethes like a white hot fire.

If you gave a chimp a laptop and a sideline pass, it would have a fighting chance to outreport King during a game.

But I'm not the only one who thinks this. The boys at Kissing Suzy Kolber produce perhaps the 2nd best read every week during football season (1st, has to be Gregg Easterbrook's TMQB column on ESPN.com's Page 2).

It is a scathing - but oddly, fair - dissertation of King's weekly MMQB column. When King isn't being an insufferable narcissist, he's quite often failing to grasp even the obvious things going on in the NFL.

But at the very least, you would hope King could be a minimally competent reporter. If nothing else, the man is easily the most connected national reporter in the NFL. A long tenure at SI, along with his role on NBC's FNIA show, means getting the facts, when needed, should be a chip shot.

One big story in the Jets-Bengals game was the sudden unavailability of punter Steve Weatherford due to "illness."

From his column this week, with comment by KSK.

My dumb comments about Jets punter Steve Weatherford on Twitter. I apologized on Twitter, and I’ll do so here. I called out Weatherford for not taking the field Saturday — it was said during the game that he was “ill” — even as cameras showed him jogging on the sidelines at one point. What I didn’t know is that moments before the game he was found to have a racing heartbeat and irregular heartbeat, and Jet medics forbade him from playing. I was kneejerk and shouldn’t have been. I should have refrained from commenting until I knew more about what ailed Weatherford. I owe him one.

KSK: Someone’s getting a free meal at Capital Grille!

The notion that kickers and punters are - generally - pussies, is well established. At the same time, however, they ARE professional athletes. They didn't end up in the NFL just because their parents drove them to practice every week.

The pay is a lot better too.

So the notion that a punter would voluntarily beg out of a playoff game with an upset tummy is ludicrous if you have any basic understanding of sports.

When I heard about it, my FIRST thought was: "Wow. That's weird. I wonder what the fuck is REALLY going on?"

King, with all his "reporting" skills, and myriad contacts and access, should have been able to get to the bottom of this, and REPORT the truth. Instead, he decided to twitter away like a dope on his cell phone.

And the douchebaggery continues.
Posted by Czabe at 12:01 AM