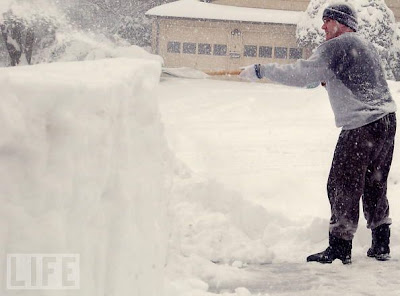 Lately, checking my email has been like shoveling snow in Buffalo.

Your job, is never done.

But for this, I am deeply grateful. Since you guys are just burying me in kind words for the show you once loved, I will try not to let it get to my head.

In they come, 10, 20, or more per hour. Even during odd hours of this past Christmas week. Well written, passionate, personal emails about the show, and what it meant for you as a listener.

Here's a little snapshot of what my collected emails look like. I want to assure everyone, that when you say "I'm sure you'll never read this..." you are WRONG! I read them all. 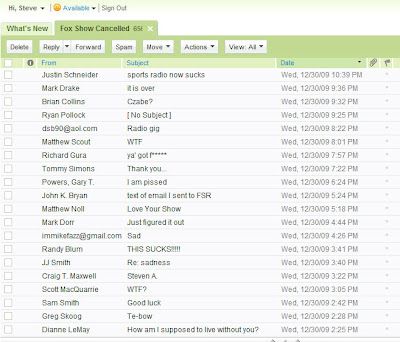 And it was my plan, to respond to every one. Well, I don't think that's going to happen. Doing the simple math (and let's face it, ANY math for me is NOT simple) if I knocked out 60 emails an hour, that's 10 hours right there. And even though my vacation has been relaxing, I would rather spend that time writing for the blog, improving the site, and producing actual content you guys can still enjoy.

But let me summarize some interesting points that keep coming across in many of your emails.

1. "Thanks." I am humbled that so many of you would "thank" me for just doing my job. The thanks was all mine, folks.

2. "I happened to find you (X years ago) while flipping around..." This reinforces another sad reality of my tenure with the network. Zero promotion. You would think that Fox, might carve out 30 seconds on their football pre-game - that's all I would want, a 30 second on-screen graphic! - which lists their M-F radio show lineup. Nope. Given the insane amount of "company push" those other guys get, no wonder it often felt like a losing battle.

3. "I laughed so hard, I had to pull over..." Humor is a tricky thing. Those who THINK they are funny, most often are not. I always felt the show had it's funny MOMENTS, but I had high standards. Maybe the show was funnier than I realized. I know this, Scotty, Solly and Galdi could all knock it out of the park with their own twisted takes, and that's why they were with me.

4. "You are the only reason I have XM, I am now cancelling XM..." Look, again. I know these are tough economic times. Do what you want. But like I said before, the concept of XM/Sirius is a radio lover's dream, and one that we could only fantasize about 10 years ago. Have faith in the concept, and support the cause, if you can.

5. "Like my dog died..." Okay, not everybody used the dog dying reference, but alot of you said the feeling was like losing a friend - or friends. I get this. You let us join you on your morning rides. We let you in on what most called a "conversation among buddies" you know at the local watering hole. Still, the depth of connection many of you expressed to the show, remains something I treat with the utmost of respect.

6. "Let me know where you end up next, you won't be gone long..." As always, this website is a great place to check in periodically, and I will be updating via the Czabe Fans facebook page. That said, nobody knows what will happen next. So let's just expect things to take a while, and if we're wrong, we'll all be pleasantly surprised.

This will be the last post about, well, what once was. Too much has happened while I was gone, that needs to be teed off on! My preliminary list...

and on and on!

Gonna be a busy year folks! We're back at it on Monday!
Posted by Czabe at 8:37 AM