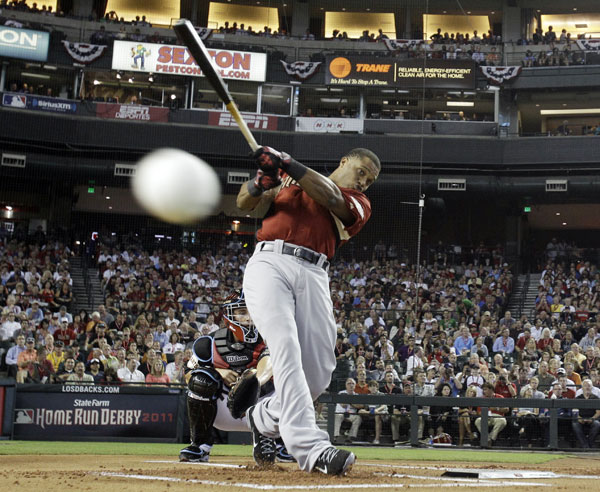 I will enjoy watching the Home Run Derby tonite. Yes, even with Berman. You see, this is the ONE time Berman is actually IN HIS ELEMENT!

When you have a carnival barker of minimal talent, this is exactly the kind of event Berman is perfect for. If you complain, well, that's like saying: "Mmmm. This cotton candy seems undercooked."

Okay, so here I am, locked and loaded and.... WHERE ARE THE DAMN RULES!?

Finally, after much searching, MLB.com "comes to the rescue."

A rules refresher, for those in need:

Each player will get 10 "outs" -- or, any swing that doesn't result in a home run -- per round, with the top four homer hitters moving on to the second round and the players with the two top combined totals for rounds one and two advancing to the finals.

And once again, the sluggers involved in the Derby will not only inspire some "oohs" and "aahs" from the audience but also go to bat for several worthy causes.

Following the format introduced a year ago, the Derby will be a charity competition between the AL and NL. Each team's captain has selected a charity, with $150,000 going to the winning team's charity and $100,000 going to the Boys & Girls Club of America (BGCA) in the name of the winning captain. The losing team's charity will receive $25,000. All remaining charity money generated by the event will go to BGCA on behalf of State Farm and MLB.

When a player gets to nine outs, the "Gold Ball" will be put in play. For each Gold Ball home run, State Farm and MLB will donate $18,000 to designated charities. State Farm will also donate an additional $3,000 for every non-Gold Ball home run hit throughout the Derby.

This event has also become social media savvy, with social media stations set up on both sides of the field so that players can log into their Twitter accounts and upload photo and video shot on their mobile phones. The hashtag #HRDerby will once again be heavily employed.

REACT: Oohhhhhhkahhhhyyyyy. Clear as mud. Sorta. Just tell me who is in the final two. And advise the fans in the stands not to risk falling off the railing to their death just because somebody hit a spray painted gold baseball.
Posted by Czabe at 6:14 PM