King of the Clown Question 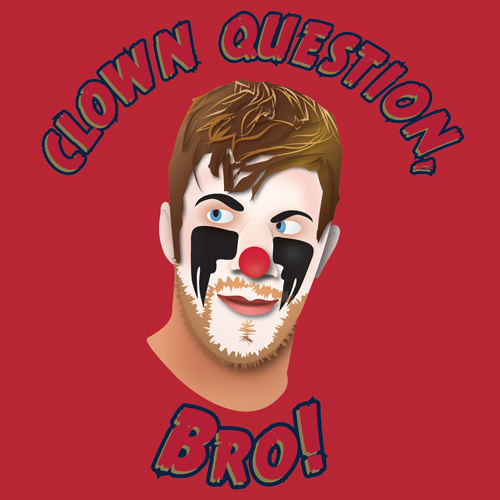 The nearly 30-minute presser took place around 5:30, during a broadcast of the Sports Reporters. And as Reader@CBJinDC pointed out, whether intentionally or unintentionally, Steve Czaban audibly interjected at least twice, complaining of clown questions.

“Robert, serious question here,” WUSA’s Dave Owens said at one point. “Have you upgraded from the Chrysler Pacifica yet, now that you’ve got the contract?”

“Well, unfortunately my dad sold my Chrysler Pacifica, so I don’t have my college car any more,” Griffin answered. “But I do have a Nissan Armada and an Audi A8, so I didn’t have to spend any money on those. It’s definitely a good deal to have two free cars.”

“Did you have to sing the fight song yet?” another reporter asked later on. (I didn’t recognize the voice.)

“I have not, other than the pep rally after I got drafted,” Griffin answered.

I kind of like the idea of an ever-present Steve Czaban Voice of God, at every press conference in town, there to judge whether reporters are asking appropriate and/or clown questions.

Thanks to Dan Steinberg for the pub. For the record, YES, I did INTENTIONALLY leave my mic up during the presser and MEANT to overlay the "clown question" taunts on the absurdly silly things being asked.

Now, mind you, I am the KING of the "Clown Question." I have asked them all. Silly questions. Obvious questions. Embarrassing questions.

I once asked Darrell Green whether they had a chance to watch any film on the defending NFL champion St. Louis Rams.

It was the FIRST DAY of training camp. They weren't going to play them until Week 12.

I have asked more than one athlete about a family member who was deceased.

I'm no better than anyone else. But, now that Bryce Harper has introduced the "Clown Question" concept into the sports bloodstream, I'll be happy to be that impartial arbiter of what IS, or is NOT, a "clown" question.
Posted by Czabe at 4:58 PM