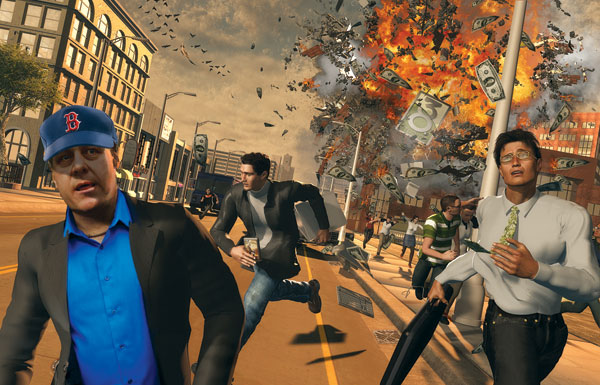 How did Curt Schilling lose $50M of his hard earned baseball fortune - basically all of it?

A: By trying to turn that into a BILLION dollars en route to being the Bill Gates of video games. This story about the demise of Curt's ill-fated 38 Studios is a real forehead slapping head-melter. Not saying Curt's a "bad guy" per se, but geezuz, what a MORON. No sense of how throwing a baseball really, REALLY hard, is just that: an ability to throw a baseball really hard. It does not make you an especially gifted "man of success" or a sudden post-retirement "titan of industry."


Everything at 38 Studios was not, however, perfect. It quickly became apparent that Schilling was new not just to video-game development, but to the basic concept of working in an office.

In December 2009 — months before Rhode Island signed on to the $75 million deal — Harvard Business School published a case study about the company titled “Curt Schilling’s Next Pitch.”

Brett Close, who joined 38 Studios as president in 2007 and soon after became its first CEO, put Schilling’s inexperience into perspective for the study’s authors, Noam Wasserman, Jeffrey Bussgang, and Rachel Gordon.

“He really needed Company 101,” Close told them. “For example, the whole concept of vacation was foreign to Curt. He actually said, ‘People get weekends off, right?’” Schilling at one point suggested that people work 14 straight days and then take five days off. It jibed with his baseball experience.

That was just ONE key chunk of the lengthy piece. It is more than worth your 15 minutes to read it all. Sadly for most pro athletes, it doesn't matter HOW you do it, but eventually the story ends with... "... and he lost all of his money."
Posted by Czabe at 9:17 AM